At the risk of sounding like an old woman, I will tell you shamelessly that I love Agatha Christie’s work. I know many people who keep the Sherlock Holmes passion alive, but I don’t know many Christie fans and I honestly have no real idea of whether I fall into a normal demographic for current readers. I’m not generally a voracious reader of mysteries, but I am always eager to understand what is great in any fiction that has become classic in some way, so I long ago found myself dabbling in and delighted by the second best selling author of all time.

I chose Peril At End House for this list because it is one of the highest rates titles I hadn’t yet read. I have to admit that after I got a few chapters in I realized that I had seen the David Suchet adaptation, but it had been long enough that I was still completely without a clue throughout the story. I actually remembered just enough to further throw myself off the scent as the plot thickened. 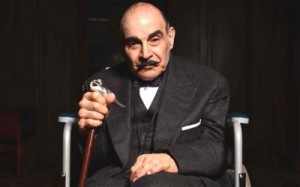 This story follows the famous Hercules Poirot, Belgian detective turned British private investigator. At the onset of a seaside vacation with his good friend Captain Hastings, Poirot announces that his is retiring entirely from the detecting business, sighting his age as sufficient reason for stepping out of the game. Within minutes he smells foul play, taking personal interest in preventing what he suspects is a murder in the making, and recanting his retirement. From here, the book quickly spins out a cast of versatile and interesting characters and events designed to completely baffle the reader. Christie is great for crisscrossing the tracks of an ensemble of possible perpetrators, motives, and incomplete events. It is up to the reader to beat the detective in piecing together what was sinister and what was circumstance.

Christie has a great style. She writes in a very simple, matter-of-fact way that seems almost effortless but actually brings out the genius of her work. Anyone who has tried their hand at writing fiction knows that writing something in a way that makes it impulsively readable is often the most difficult task to accomplish. Her simplistic style makes it easier for the reader to latch on to the ideas and emotions of the characters and overlook the important details dropped here and there. She writes to lull you away from critical thinking. That being said, her stories are written more to keep you on the edge of your seat than to make perfect sense. She will usually give you a twist ending that works, but one that leaves a few weak plot points. If you’re frustrated when you don’t have sufficient information to beat the sleuth to the conclusion, you might find this book, among her others, just a bit aggravating.

Overall, Christie makes for a great read. I once read an espionage thriller she wrote near the end of her career and found it horrible. The Mysterious Affair At Styles is still one of the most remarkable books I’ve ever read, and it was her first. Overall, Christie does a remarkable job of writing extremely well, creating enjoyable characters, and finding a balance in plots that come back together well while maintaining a truly complex, twist endings. Anyone who likes a bit of mystery should enjoy The Peril At End House.

“The Man Who Was Thursday” by G.K. Chesterton

I read, I write, I watch things grow. Fond of a good story. Living a great story.